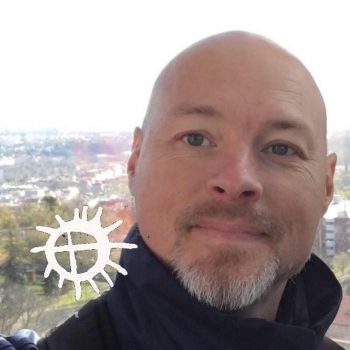 I represent the board of the Sámi Community in Stockholm, Sameföreningen i Stockholm. Our chairman, Nik Märak, is in Jokkmokk, why I was appointed to represent our organisation.

We are currently more than five hundred members, collectively operating most of the Sámi activities going on in this region.

Now, to the National day. We are a people without a nation. So how can we celebrate a national day at all? Well, in a classical Sámi manner, you tend to twist everything around. We are a people with four nations. One people – four nations. We can actually celebrate five national days every year – if we want and not get bored with all the celebrations going on. But every year, we start with the most important one, the 6th of February, remembering the first Sámi gathering back in 1917.

Exactly two weeks ago from today, the supreme court of Sweden, decided in a very important case regarding whom has the actual right to administer hunting and fishing in Girjas sameby. The court decided in favour of the Sámi village.
Now, you would think the case was closed and sealed after that. But another case has started, going on outside the court room. There have been several verbal attacks on Sámi individuals, individuals that are far from being involved in the actual case and Sámi village.

We saw the same tendencies after the supreme court decided in the case Nordmalingmålet, also in favour of the Sámi village, back in 2011.

I would argue that the difference between now and then, are the narratives formed in media today. The stories told in some media, are using phrases such as “the Sámi people now controls 1/3 of Sweden” and “Sámis get special rights” or “Sámi rights are conflicting with the liberal idea of all people having equal rights”.

Well, if a country consequently, for over 150 years, treats a people within its borders as lesser humans, confiscating all their lands and by building political and ideological systems destructing their institutions and livelihoods, their ability to transfer culture and language over generations and their ability continuing to exist as a people – then of course we would agree that “those special treatment” the Sámi people was abused with, of course conflicts with the idea of all people having the same rights. In fact, it has been proven that several of the political actions performed by the government against the Sámi society, was actually in conflict with their own constitution.

Consequently, when those rights are given back – in small steps – to the Sámi people in court, rights that was once stolen, a few people, can actually confront Sámis, shouting and behave like they lost something precious. Almost as if their favourite football team lost an important game.

Although we can blame media for much of the emotions currently stirred in the Swedish society regarding the case, I think there is something comforting when some media does not have the ability to report from facts nor have the ability to grasp the full context or journalists proofing themselves to be stuck in a very narrow national story of resources, production and trade where Sámis are standing in their way. It kind of means that we are one step ahead, in the understanding how the world is actually wired. That is kind of cool. It gives us a creative space where we still can provide the rest of the world with artistic innovations and new ideas, where the western world still is living in a confined box.

Additionally, imagine hundred years from now, who will be the bad guys, the Sámis standing up for saving the forests, mountains and their rights and culture – or – the ones destroying the lakes, the rivers and the virgin forests, leaving polluted mine dams and the extinction of local fish species and so on?

Therefore, this is one of many reasons we should celebrate this day being proud rather than get stuck in the latest events. We are all here responsible for carrying and developing a holistic thinking, including our ancestors and history, the nature and our culture for the long term sustainability of all our nations.